What an interesting topic. Isn’t it? What if I stated the topic as “How to take decisions?”, would the topic still interest you? Think.

So, what is the difference between decisions and right decisions? Have you ever wondered, at the time of making the decision, do we know if it is going to be the right decision? Think about it this way: When you go to a new restaurant and you are given the menu to place the order for anything (decision involved). As you are new to this place, you order something as per your understanding (decision taken).

Now if what you order is well cooked by the chef and loved by all, they appreciate you (right decision). On contrary, if it is not well cooked or not liked by most, they tease you not to order again (wrong decision).

So, what has just happened? Stay close with me here and think – could you ever say “How to take the RIGHT decision?”

Taking the decision is in your hand. Now whether it would be a right or wrong decision, would be decided later (and you may not be playing complete role in that). Whoever he/she is, whenever we are faced by a situation in our life, we try to take the best possible decision as per the situation and history. But the verdict would be out later.

But I don’t have the decision-making ability

Let’s clear the fundamental’s first – decision making is not an ability. It is a skillset learned. Be it sport or finance, to be accurate maximum number of the time, all you need is practice. Similarly, the more decisions you take in life the righter decisions you take in life (because you become experienced). But there is an added advantage that comes along with it – you become confident.

The next step then becomes what would be the intensity of being right/wrong. In the finance market, it doesn’t matter if you are wrong with the stock purchase 7 out of 10 times but what matters is how wrong you were in the 70 percent failure time and how right you were for the balance 30 percent of the time. As long as you are positive overall, you have gained.

So how do we become confident in taking big decisions of life?

For example, at the starter level, there are few daily basis decisions which can help us become confident in taking big decisions. Such as:

Try to take control of these decisions. The greater number of decisions you take in day-to-day life, the more confident you become. 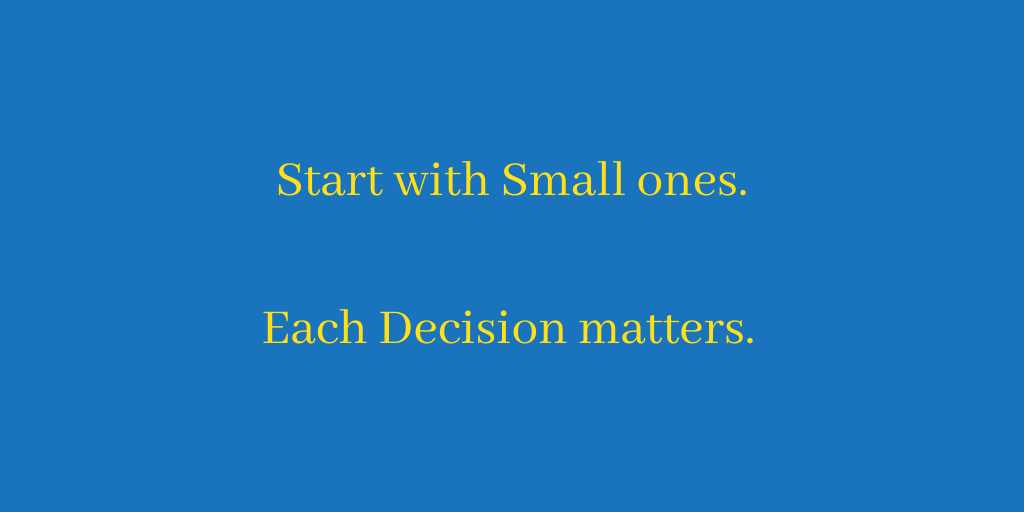 So, do I keep investing time in such matters?

Once you have developed the art of decision making, you have to relearn few things and let go these decisions again and take decisions at primarily level so you need not decide at such micro level.

So why learn to take these decisions when you have to relearn them? Because micro decisions would make you confident to make macro decisions.

But what if I go WRONG?

Good question. Now I ask you the same: What if you go wrong? Think. Let’s take our restaurant example again. What if the food you ordered was not up to the mark? What situations can happen?

Situation 1 – You people let it be. Order something new.

Situation 2 – May be for a while people blame you for ordering wrong food.

Situation 3 – You people have a good time and go home.

Irrespective of the scenario, think about it – would you people remember this after a year? Imagine for something which was so minimalistic, you fear to make the wrong decision.

Fine. But why take decisions when somebody else can take for you?

Because, you are responsible for your life.

One of the best parts of taking control of decisions is “you are responsible for whatever happens to your life”. At the end of the day, you can be satisfied that whatever happened, was your choice. You have none to blame. And that’s a satisfaction in itself.

So, begin taking decisions in YOUR life. Take charge. 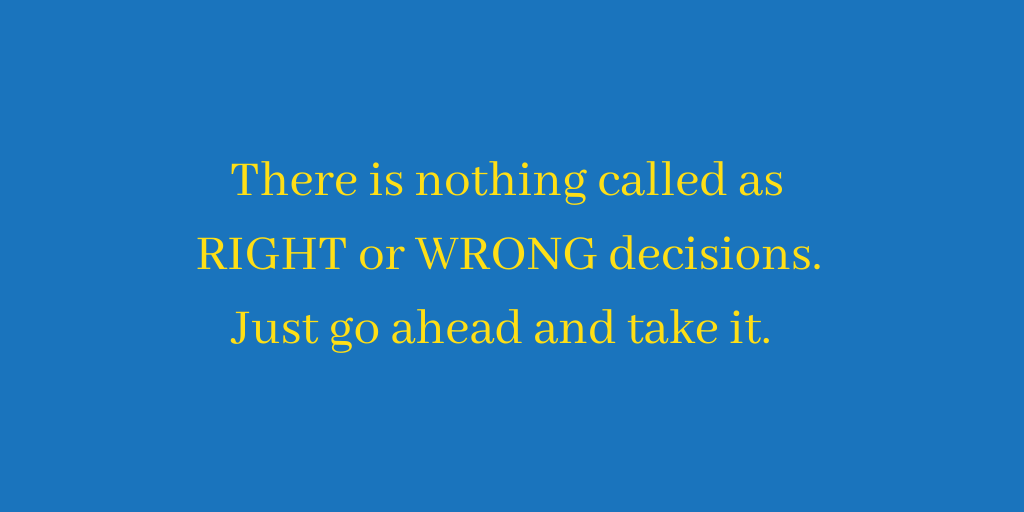 I think I need to see a psychiatrist

Let's contribute to make this world a better place.
Ajay

Thanks & Respect to ALL My Team Members

How to make WFH/Staying at Home Productive & Interesting?